The Community Centre is the social, cultural and sporting focus of the village and have been used by all parishioners at one stage or another. At present the roof is seriously defective with five holes in it which allows water to fall directly onto the quality timber floor. All the chutes and downpipes are also made from asbestos and also need to be replaced thus negating the ingress of water into the walls and preventing further damage. It is imperative that the project is completed not only for our present parishioners but for future generations to come. The committee is a small one and would appreciate the support of the parish with this project. Ongoing fundraising consists of the following:

The Friars Gate 27th Annual Festival of One Act Drama runs for the October Bank Holiday weekend.  Enjoy a feast of drama - three evening of drama with some of the best amateur drama groups in the country on Friday 27, Saturday 28 and Sunday 29 October. Three one act plays a night for three nights!  Contact www.friarsgate.ie or 063-98727 for details.

A Halloween Party Night in aid of Milford Hospice and The Mid Western Cancer Foundation takes place at the Devon Inn Hotel on Friday, November 3. A night full of good food and wine, music, craic, fun, games and lots of prizes and surprises. There will be competitions for best dressed, best masquerade mask, best Halloween outfit and much more! Dance the night away to Keep in Touch band and DJ. Special guests on the night are Elma, Fionnbar and Jema Walsh of Donal Walsh #Livelife Foundation. All proceeds are going to Milford Hospice and The Mid Western Cancer Foundation, two worthy cancer charities in the Mid West. Tickets are €55 per person. Please contact Joan O'Sullivan 069 82166/086 1625960, Geraldine Mulvihill 087 2036112 or Lisa Ruttle 087 9544848.

We extend our sincere sympathy to the family, relatives and friends of Johannah O'Neill,  Dromina, Mary O'Shaughnessy, Charleville, and William McCarthy, Kilmallock, who died recently.

Bruree Golf Society and Bruree Hall committee will hold a Poker Classic at the Central Bar, Bruree, on Friday, November 10th, starting at 9.00 pm. Tickets are €20 and are available from members of both of the committees. There will be a draw for anyone who buys a ticket and cannot attend!

Bruree Community Hall will hold a Primary School Kids Halloween Disco at the the hall on this Thursday, October 26, from 6.30 to 8.00 pm. The theme for the night will be "Creepy Clowns" and there will be face painting, spot prizes, fun and games, hamper raffles and a shop. Admission is only €3 per child. All proceeds will go to the "Save Our Roof" fund for the hall committee.

Tickets for the West Limerick 102FM 50/50 Draw are now on sale throughout West Limerick or from the station's offices in Newcastle West (069 66200) for next week's draw. They cost just €2 each. Half the proceeds will be distributed as prizes each week. Recent winners were Peg Heffernan, Ardagh  (€318) and Grace O'Connor, c/o Beauty Bliss, Rathkeale, (€388). Tickets are available locally from John Harrold. Support your community station!

St Patrick's N.S., Bruree, are holding their annual Silver Circle Draw for 5 weeks, starting on Tuesday, November 7. Total cost for the 5 weeks entry is only €10.

The Holy Souls special day in Emmanuel House, Clonfert, takes place on Sunday, November 19, under Bishop Kirby. This is a full day of prayer for the Holy Souls and there will be an Adoration Mass and confessions. It will be led by Eddie Stones, who will give a talk, assisted by a team of priests. The bus will pick up in Bruree at 8.15 am and it is filling up fast. Book early and name to accompany fare of €20. Contact Ann Mockler (063-90564) for further details. All are welcome.

Ballyhoura Development is providing a wide range of training and workshops this autumn for local community groups, their officers, committee members or directors, and volunteers. Here’s what’s coming up over the next number of weeks:

Thursday, October 26: Roles and Responsibilities of Board Members of Charity and Community Organisations - 7.00 to 10.00 pm, at Kilbehenny Community Centre

Tuesday, November 7: Choosing the Appropriate Governing Structure for your Community Organisation or Social Enterprise - 7.00 to 10.00 pm at the E-Charleville Enterprise Centre

Thursday, November 9: The Principles of Good Fundraising for Local Charities - 7.00 to 10.00 pm at Mitchelstown Enterprise Centre

All programme events are free though advance bookings should be made through David O’Grady, Development Officer with Ballyhoura Development, by email: dogrady@ballyhoura.org or tel. 063-20511.

An important book on religious vocations in the diocese of Limerick by Brother John Feheney will be launched at Don Bosco Hall, Our Lady Help of Christians Church, Plassey Park Road, Milford, Castletroy, Limerick, on Sunday, November 12, at 3.00 pm in the afternoon. Under the general title of Good Seed, Fertile Soil, Volume One of this series, covering the 26 parishes of West Limerick, was published in November 2016. Now, one year later, Brother John is launching Volume Two, covering Limerick city and parishes in the south of the diocese. The book is in dictionary format, with the names of 1,000 individuals arranged alphabetically. The priests included were attached to 50 different dioceses, not a few from dioceses in the USA, Australia, UK and Scotland. Religious included in the book belonged to more than 90 different religious congregations. There entries from virtually every parish in the city and south of the diocese. Readers are invited to attend the book launch. Copies of both Volume 1 and Volume 2, each costing a modest €20, will later be on sale at Celtic Bookshop (061-401155), 2 Rutland Street, Limerick.

Bruree won the South Limerick Junior Hurling title in 1929, defeating Hospital at Kilmallock on September 22nd. The winning score was 3-3 to 1-2. The game was played before a large and thoroughly appreciative audience. It was a foregone conclusion that the Bruree boys would win, and in this generally expressed opinion the judgement of the “man on the ditch” was correct. Their win is all the more meritorious in view of the fact that the Hospital team had the great advantage of having a score of matches this season and were in the pink of condition as regards physical fitness (there is no such thing as being overtrained in hurling), yet the boys from the banks of the Maigue outran, outplayed and outstayed their veteran opponents. It is no reflection on the Hospital players to go down before such a combination of speedy, long striking and close tackling hurlers as Bruree can field. And they have not yet reached their peak. They will go far. In the first round of the competition in June, Bruree had an easy victory over Elton. In August, it appears that Bruree had a walkover from Camogue Rovers in the next round.

The same report appears in the press in January 1931 and April 1931 – very confusing! I presume the game was the 1930 County Junior Hurling Final. The report tells us that in the junior hurling championship, between Ahane and Bruree, the Ahane boys were on top from flagfall to finish and won pulling up. The half time score was Ahane 6-1 Bruree 0-2 with the final score being Ahane 8-5 Bruree 1-3.The Bruree team was P. Potter. J. Potter, D. Lawlor, P. Lawlor, J. Callaghan, P. Callaghan, J. Shea, J. Cussen, W. Murphy, T. Harold, M. Enright, D. Kerwin, M. Sexton, C. Cahill.

December, 1966: One of the biggest crowds in the Croom Gaelic Grounds for many years had little to enthuse about while they watched Bruree and Ballybrown contest the Limerick Junior Hurling final yesterday. Bruree, who looked the fitter, led by a point at the interval, but poor finishing by the Ballybrown forwards had squandered many chances. On the change over, a reshuffled Bruree side got quickly off their mark and a touchline puck from Duggan from 40 yards out evaded the Ballybrown defence and finished in the net. Further scores from P. O'Brien (0-1), Teddy Cotter (1-0), Moynihan and Potter (0-1 each) clinched the issue for Bruree. Ballybrown's only reply in the second half, was a point by Doney Bourke. Bruree 4-4 Ballybrown 1-5.

November, 1941: The County Limerick Foxhounds met at Garryfine on Tuesday, 11th inst. and the meet was on the small side, due, of course, to the effects of the war. The Committee of the Limerick Hunt deserve every credit for carrying on in the face of many difficulties.

Garryfine covert held a number of foxes and after some time one was forced away to the West through the plantation and on towards Killacolla School, where he wheeled to the left as if heading for Ross, but a friendly gullet a bit further on spared him for another day. From Dargan's there was a nice spin through Woodcock and on to Derawlin, where he also got to ground. The days sport was pretty good but we missed many of the regulars and hope before the season closes that they will be with us again to participate in the grand old sport.

At the Maigue Hall for the past week, Mr. W. Costello with his Company, The Bohemian Players, staged some beautiful pieces. The performances were excellent and as a consequence the hall was filled each night. A return visit by Mr Costello is looked forward to at an early date by the many who patronised him at Bruree.

The threshing of wheat, oats and barley in this district is now almost complete. A good share of ploughing has been done and winter wheat sown to a large extent, so it is evident that the people are alive to the critical situation which is staring us in the face. 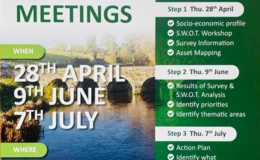 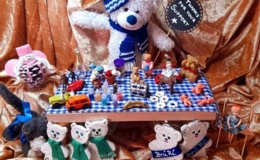 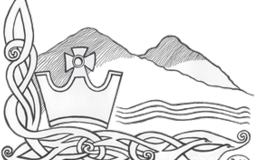